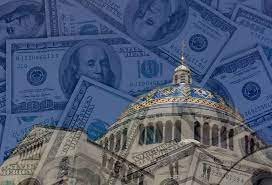 I came across two very disturbing pieces this morning (one written, the other a video) about faith in a time of chaos. The written article was an editorial in The National Catholic Reporter (NCR) by the paper’s former editor, Tom Roberts. It elaborated on a theme I dealt with here a number of months ago about a “hostile takeover of the Catholic Church” by wealthy hedge funders, bankers, and business leaders.

According to Roberts, the wealthy’s buyout of the church is moving forward at an alarmingly rapid and efficient pace. And this to such an extent that the rich are on the brink of becoming the church’s “new magisterium.”

That is, their money and the media megaphones it buys are enabling them to override even the voice of Pope Francis and the teachings of the official magisterium about social justice and the gospel’s “preferential option for the poor.”

In place of those doctrines, the Magisterium of Money is centralizing issues that nowhere appear in the biblical tradition, viz., abortion, homophobia, free market economics, voter suppression, and Trumpian politics. It’s convincing Catholics that those unbiblical matters represent the heart of Catholic moral concern.

The second disturbing piece that crossed my desk this morning was frighteningly related to the first. It too unwittingly affirmed the superiority of the viewpoint of the wealthy over that of the poor championed by the church’s social teaching.

The affirmation took the form of a video invitation to join a course by Caroline Myss, described as “one of our greatest modern mystics.” Her course is called “The Mystical Truths Behind Radical Change.” The course’s trailer explained an image that is central to this particular mystic’s understanding of the spiritual life.

The human condition, Dr. Myss explained, can best be understood in terms of a stationary structure like the Empire State Building. Like those constructions, we’re all outwardly fixed and immobile in our settings. Internally, however, movement abounds. Elevators move us upward, even to penthouses high above the dirt, smells, and squalor that constitute the reality of those living on comparatively low rent ground floors.

For instance, from the top of the Empire State Building vistas of extraordinary beauty unfold. Squalor, noise, and disagreeable odors disappear. They’re replaced by antiseptic panoramic visions revealing the city’s order and splendor. Central Park, the Hudson River, clouds and even birds suddenly materialize. At night, the danger of Batman’s Gotham is replaced by a brightly lit, enchanted fairy kingdom called Manhattan.

According to Myss, her image represents the task of the spiritual life. It’s like taking an elevator to the top floor of our more modest (10 floor) stationary buildings. Spiritual development is about attaining a level of consciousness inaccessible from the ground floor.

I have no doubt about Dr. Myss’ good will and mystical acuity. And, at a certain level, I get her point about the need for “higher consciousness.” My fear, however, is that her image as well as her understanding of the spiritual life feeds into and supports the project of the Magisterium of Money. It implicitly contradicts Catholic Church social teachings and their preferential option for the poor.

Those teachings are based on the fundamental revelation (in a poor first century construction worker) that mystical awareness is developed primarily on the ground floor, among the street walkers, gang bangers, and garbage collectors. What some call “God” is found precisely in the ones invisible from the 10th floor, and even more so from urban penthouses. I’m talking about people like Jesus himself – harassed by the police and who end up in jail, in the torture chamber, and on death row.

In other words and according to the official Catholic magisterium, the spiritual life and “higher consciousness” is found precisely by descending from penthouses and fairy kingdoms to the stink, dirt and noise that cry out for the radical change Dr. Myss advocates and that the Magisterium of Money completely ignores.

Ironically (and as the Jesus event clearly teaches) “higher consciousness” remains inaccessible from the spiritual equivalent of penthouse perches and corner offices on Wall Street.