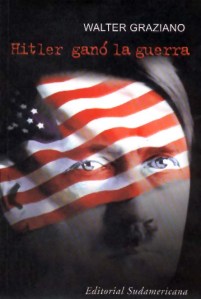 This is an “easy essay” (in the spirit of Peter Maurin’s contributions to “The Catholic Worker”). It is a follow-up to Monday’s posting about Dietrich Bonhoeffer and the Nazis’ reincarnation in today’s United States. It explains how Hitler actually prevailed in World War II (the Second inter-capitalist war). The “essay” references Marge Schott, the then-owner of the Cincinnati Reds, who in 1996 famously said that “Hitler was good in the beginning, but went too far.” The caption under the picture above reads in Spanish: “Hitler Won the War”

Following Germany’s defeat
in “the First Inter-Capitalist War,”
the system was in trouble in “das Vaterland.”
It also foundered world-wide
after the Crash of ‘29.
So Joseph Stalin
convoked a Congress of Victory
to celebrate the death of capitalism
and the End of History —
in 1934.

Both Hitler and F.D.R.
tried to revive the corpse.
They enacted similar measures:
government funds to stimulate private sector production,
astronomically increased defense spending,
nationalization of some enterprises,
while carefully keeping most in the hands of private individuals.
To prevent workers from embracing communism,
both enacted social programs otherwise distasteful to the Ruling Class,
but necessary to preserve their system:
legalized unions, minimum wage, shortened work days, safety regulation, social security . . .
Roosevelt called it a “New Deal;”
Hitler’s term was “National Socialism.”
Roosevelt used worker discontent
with their jobs and bosses
to get elected four times.
Meanwhile, Hitler successfully directed worker rage
away from the Krupps and Bayers
and towards the usual scapegoats:
Jews, communists, gays, blacks, foreigners and Gypsies.
He admired the American extermination of “Indians”
and used that model of starvation and internment
to guide his own program for eliminating undesirables
by hunger and concentrated slaughter.
Hitler strictly controlled national unions,
thus relieving the worries of the German elite.
In all of this,
he received the support of mainline churches.
Pius XII even praised der Führer as
“an indispensable bulwark against the Russians.”

Dietrich Bonhoeffer and the German “Confessing Church”
resisted Hitler’s program
of social Darwinism, patriotism and persecution of the undeserving.
Confessing faithful were critical of “religion”
which combined anti-Semitism, white supremacy, patriotism and xenophobia
with selected elements of Christianity.
They insisted on allegiance
to Jesus alone
who stood in judgment over soil, fatherland, flag and blood.
They even urged Christian patriots
to pray for their country’s defeat in war.
Bonhoeffer participated in a plot to assassinate Hitler
and explored the promise of
Christianity without “religion.”

Hitler initially enjoyed great popularity
with the powerful
outside of Germany,
in Europe and America.
He did!
Then as baseball magnate and used car saleswoman, Marge Schott, put it,
“He went too far.”
His crime, however, was not gassing Jews,
but trying to subordinate his betters in the club
of white, European, capitalist patriarchs.
He thus evoked their ire
and the “Second Inter-Capitalist War.”

Following the carnage,
the industrialists in other countries
embraced Hitlerism without Hitler.
They made sure that communists, socialists and other “partisans”
who bravely resisted German occupation
did not come to political power,
but that those who had cooperated with Nazis did.

In all of this
is forgotten the Jesus of the Christian Testament
who was born a homeless person
to an unwed,
teenage mother,
was an immigrant in Egypt for a while,
came from the working poor,
was accused of being a drunkard,
a friend of sex workers,
irreligious,
possessed by demons
and condemned by the state
a victim of torture
and of capital punishment.

Does this make anyone wonder about Marge Schott,
the difference between Hitler’s system
and our own,
and also about “religion”
and how to be free of it,
about false Christs . . . .
And who won that war anyway?

4 thoughts on “How Hitler Won the Second Inter-Capitalist War”