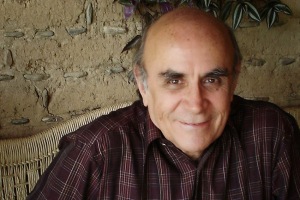 Last month Peggy and I had a prophet in our home: Gustavo Esteva.

No doubt, the seer would be shocked by my characterization. After all, Gustavo says he’s an atheist. He’s a harsh critic of the Catholic Church — and all religions for that matter.

Gustavo was once an IBM executive, and an official high-up in the Mexican government. At one time he was also a revolutionary guerrilla. Now he calls himself a de-professionalized intellectual and itinerant story-teller. He’s the founder of an alternative university (Unitierra). He has authored more than 30 books, among them Grassroots Postmodernism and Escaping Education.

But I stick with my assertion: he’s a prophet.

In the presence of someone like that, you can imagine the transcendent conversations we had around our dinner table each evening during his ten-day stopover in our home. Sometimes dear friends were there with us. At others, it was just Peggy and I.  We talked of almost nothing else but politics, literature, spirituality and the direction of history.

Gustavo is from Oaxaca in Mexico.

Among his outstanding qualifications is his position as advisor to the Zapatista revolutionaries. Perhaps you remember them. They’re the Native Americans who on January 1, 1994 captured the imagination of Mexico (and many of us outside) when their lightly armed military forces occupied five Mexican towns around San Cristobal in the state of Chiapas.

They were protesting the implementation of the North American Free Trade Agreement (NAFTA), which they said spelled the death of their culture and way of life. Their courageous Indian Uprising made them instant international heroes. So did their eventual abandonment of armed struggle in favor of non-violent resistance.

On more than one occasion, Peggy and I have led students into Zapatista communities to experience their radically counter-cultural lives first hand.

According to the Zapatistas, women are leading the way they have embarked upon.  In fact, 60% of their army commanders are women.

The importance of women’s leadership was the heart of the extraordinary convocation Gustavo gave at the beginning of his “scholar-in-residence” stint at Berea College. It was a theme to which he returned often during his many classes and lectures there. Women are leading the way, he said, into the “other world” that is not only possible but required if our planet is to survive.

Our threatened survival is where Gustavo started. He said our world stands in a position of unprecedented danger. It is threatened by climate chaos, oligarchical governments, tremendous wealth disparities, an economic system that simply doesn’t work, schools and communications media that propagandize rather than inform, and by an emerging and universal police state with its system of perpetual war that (suicidally) defends the status quo. Under the present world order, the line between governments, the military, the police and the judiciary on the one hand and the criminals and thugs on the other has completely disappeared. Not a pretty picture.

During his general convocation, Gustavo held us all spell-bound as he outlined the seven principles to guide us out of the morass just described. They represent the North Star that guides the Zapatista movement as Native Americans once again mark out the path to planetary survival. The Zapatista principles call into question our entire way of life.

Here they are as Gustavo explained them:

Not surprisingly, not everyone welcomed that message of coöperation, non-violence, care and acceptance. During the Q&A following Gustavo’s principal address, a particularly articulate young man posed a question that must have been on the minds of many “exceptionalist Americans” in the audience.

“You’ve described a rather bleak world, Gustavo,” the young man said. “But surely you’re talking about a reality outside the United States. After all, here we enjoy extraordinary freedom and prosperity. That’s shown by the fact that so many foreigners are anxious to come here. Isn’t that true?”

Gustavo responded, “I have bad news for you, my friend. The United States you describe is fast disappearing, and is harder and harder to find. Your country with its pot-holed highways, homeless beggars, and falling bridges increasingly resembles what you call the Third World.

“And that’s the purpose of your politicians’ New World Order – to create a reality where we’re all racing to the bottom, while they enjoy the cream on top. Unfortunately, that cream is also fast evaporating. Soon the system benefitting the 1% will collapse entirely. (In fact it’s happening before our eyes.)  There is simply no exception to the collapse I’ve described. To save ourselves we have no alternative to a complete change of guiding principles. The Zapatista principles I’ve just described and which centralize women’s ways of knowing show us the way.”

That’s the way real prophets talk. They’re usually right. This time however the warning is planetary and universal.

Will we listen and adopt the Zapatista way?