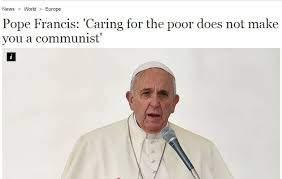 Today’s gospel story, the familiar “Parable of the Talents,” is about economics. It’s about the world of investment and profit-taking without real work. It’s also about dropping out and refusing to cooperate with the dynamics of finance, interest and exploitation of the working class.

The parable contrasts obedient conformists with a counter-cultural rebel. The former invest in an economic system embodied in their boss – “a demanding person harvesting where he did not plant and gathering where he did not scatter.” In other words, like the system of capitalism itself, the boss is a hard-ass S.O.B. who lives off the work of others. The conformists go along with that system which to them has no acceptable alternative.

Meanwhile, the non-conformist hero of the parable refuses to go along. And he suffers the predictable consequences for doing so. Like Jesus and his mentor, John the Baptist, the non-conformist is marginalized into an exterior darkness which the rich see as bleak and tearful (a place of “weeping and grinding of teeth”). However, Jesus promises that exile from the system represents the very kingdom of God. It is filled with light and joy.

In contemporary terms, today’s gospel selection could hardly be more pertinent. It contrasts two current understandings of the contested terrain that is today’s Christianity. One understanding endorses our polarized economic system where “everyone who has is given more so that they grow rich, while the have-nots are robbed even of what they have.”

That concept is embodied today in President Trump and his Republican cohorts. The other finds its personification in Pope Francis.

In sharp contrast to Trump’s faith in the capitalist system, Pope Francis himself is trying mightily to distance himself from it. He’s like the servant in today’s parable who buried his talent in the ground refusing to invest it in a corrupt system that invariably widens the gap between the rich, like Trump, and the poor the pope is attempting to champion.

Francis couldn’t be clearer about rejecting the elements of capitalism celebrated by the U.S. president. The pope has repeatedly urged action to secure the basic entitlements the poor deserve. These include rights to land, housing and work as well as to higher wages, unions and social security – all of which are abhorrent to Republicans.

Francis even connected being Catholic with communism. “It’s strange,” the pope said, that “if I talk about this, there are those who think that the Pope is Communist. . . The fact that the love for the poor is in the center of the gospel is misunderstood.” Fighting for the poor, he added, doesn’t make me a communist; it makes me Catholic.

Obviously, the statement suggests significant overlap between Marx’s critique of free market capitalism and the social teachings of the church. The pope’s words certainly don’t sound like a ringing endorsement of the free market.

And how should Catholics express their love for the poor? Clearly not by endorsing the dynamics of the free market Trump and his allies lionize. In the “Joy of the Gospel” (JG) – published in 2014 – the pope identifies the unfettered markets so dear to Republicans’ hearts (along with their “trickle-down” ideologies) as homicidal (JG 53), ineffective (54) and unjust at their roots (59). He sees “each and every human right” (including education, health care, and “above all” employment and a just wage (192) as intimately connected with “defense of unborn life” (213).

And it gets worse for the Republicans’ position. Their party, of course, loves the free trade agreements that are at the heart of the corporate globalization the pope deplores. One wonders how Catholic members of the GOP reconcile advocacy of free trade agreements with the pope’s uncompromising words “We don’t want this globalized economic system which does us so much harm.”

Clearly, the debate about unfettered capitalism is settled in the pope’s mind. He has condemned the system without equivocation. And in doing so, Pope Francis has established himself  as the foremost moral leader of our time. Virtually alone among world leaders, he has the courage to call us away from the worship of Market and Money.

The alternative, he assures us, is not a world of darkness, weeping and grinding of teeth. It is a kingdom of light and joy.

It is time for Jesus’ would-be followers to join that conversation – about getting from here to there in the name of the gospel.

4 thoughts on “Be Like Pope Francis: Bury Your Talent, Oppose Capitalism as We Know It!”