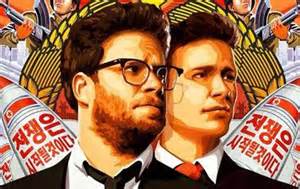 Recently I spent an hour and 52 minutes watching “The Interview.” I expected having to grit my teeth through nearly two hours of anti-communist propaganda. After all the film was produced by Sony whose CEO, Kaz Hirai, sits on the board of the CIA think-tank, the Rand Corporation. According to investigative journalist, Tim Shorrock, Sony directly consulted the CIA about the screenplay. Langley gave specific approval to “The Interview’s” graphic assassination scene.

Nevertheless, I justified the apparent waste of time on the grounds that the controversy surrounding “The Interview” had made it a cultural event not to be ignored. President Obama’s initial belligerent remarks about Pyongyang’s (completely unsubstantiated) hacking of Sony’s corporate data seemed hasty to say the least. They had made an international incident out of the release of this light-weight comedy.

North Korea’s response, of course, was predictable. Like Cuba, it has for decades been the object of CIA attempts at regime change and sanction. And the hair-brained method proposed in the film for disposal of President Kim Jong Un was completely reminiscent of past CIA attempts on world leaders like Fidel Castro. Moreover, President Obama’s pivot towards Asia, especially with Okinawa bases under threat of expulsion from Japan, has necessitated a high-profile enemy in the region. And North Korea conveniently fit the bill as enemy du jour. No wonder its leadership felt threatened by what they saw as yet another CIA plot to foment rebellion.

As it turned out, however, “The Interview” came across as a more effective send-up of U.S. culture, politics and the CIA than an indictment of North Korea. Whatever the intentions of its producers, its basic take-away was this: U.S. foreign policy is run by provincials who have no understanding of the regimes they routinely attempt to change. Much less do they grasp those regimes’ historical and political contexts.

In fact, the political understanding of the film’s dumb and dumber protagonists, Seth Rogen and James Franco, is summarized in a single slogan repeated throughout “The Interview,” “They hate us ‘cause they ain’t us.”  That’s it – a completely ignorant and self-congratulatory level of analysis whose depth rivals Bush 43’s explanation of 9/11, “They hate our freedom.”

However, contrary to their expectations, Rogen and Franco discover in Kim Jong Un (as portrayed in the film) someone totally like them. He’s a frat boy, shallow, insensitive and entirely obsessed with sex, drugs, and American celebrity culture.

Moreover Jong Un’s crimes mirror those of the CIA itself.  That is, according to the Langley, the North Korean president’s policies are reprehensible because they starve his people, keep them under constant surveillance, torture his enemies, and threaten the world with nuclear weapons. He therefore deserves to die.

But as North Korea’s “dear leader” himself points out in the film’s climactic interview, those are the very crimes of which the United States itself is guilty – but on a much larger scale. The Americans, he observes, are not just responsible for starting the Korean War. Their decades-long sanctions on the country along with their unrelenting policy of regime change have attempted to create famine throughout the northern part of the peninsula.

Jong Un might have added that the U.S. is one of the world’s most egregious actors when it comes to cyber-warfare and that NSA surveillance hacks into private communications across the globe not just in a single place.  The U.S. also maintains torture sites world-wide; it has more prisoners per capita than any other country (including North Korea). It is the only nation to have used nuclear weapons, and is in the process of modernizing its entire nuclear arsenal.

This means that the decision to kill Kim Jong Un represents a subconscious act of self-destruction. Its logic actually justifies attacks on the United States, whose crimes (once again) mirror and dwarf those of the “international criminal” destroyed at the film’s conclusion. This makes the assassination a kind of suicide by proxy – an expression of a death-wish.

What I’m suggesting is that the film’s (so far) overlooked message is this:  They don’t hate us ‘cause they ain’t us; they hate us because we are us. And attacking us is far more justifiable than any attack on North Korea.

All of that makes one wonder about Kaz Hirai. Might he not be a double agent? Perhaps he has cleverly tricked the CIA into approving a self-parody that unwittingly makes a laughing stock of the organization’s criminality and idiocy.

Such satire represents the essence of “The Interview,” whether that’s intended or not.