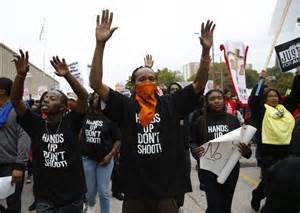 On Sunday the Lexington Herald Leader here in Kentucky published an apology by Washington Post blogger and MSNBC commentator, Jonathan Capehart.  The article was entitled “Ferguson policing concerns valid, but ‘Hands-Up’ not based on truth.”

Capehart’s retraction of initial support for the “Hands-Up” movement was based on his reading of the Department of Justice (DOJ) investigation that “filled in the blanks, corrected the record and brought sunlight to dark places.” The report forced Capehart (an African-American) “to deal with uncomfortable truths: Brown never surrendered with his hands up, and Wilson was justified in shooting.”

According to the Wapo journalist, his conclusion was based on the DOJ’s “exhaustive interviews with witnesses, cross-checking their statements . . . ballistics, DNA evidence and results from three autopsies.” All of these showed that officer Wilson “knew about the theft of cigarillos from the convenience store and had a description of the suspects . . . Brown fought with the officer and tried to take his gun.”

Capehart’s general conclusion: “. . . we must never allow ourselves to march under the banner of a false narrative on behalf of someone who would otherwise offend our sense of right and wrong.”

Capehart’s conclusion is disturbing on at least three counts. It first of all ingenuously accepts the Department of Justice as a disinterested arbitrator.  Secondly, it simply accepts the false conclusion that Officer Wilson had no alternative but to kill Michael Brown, shooting him six times.  And thirdly, both Capehart’s article and the DOJ report reinforce the erroneous impression that police officers are under constant threat and so can be excused for their over-reactions.

Is the DOJ disinterested? Hardly – at least not if we keep the big picture in mind. Remember, there is an encroaching police state in our country defending the interests of the 1% against the rest of us. Under the aegis of the DOJ, increasingly militarized police forces have gradually assumed the role of occupying armies, especially in communities of color.

Moreover, in representing the elite, government agencies routinely lie to us. At what point do we conclude that they have lost credibility as disinterested investigators, and discard out of hand any claims that support the forces of DOJ-sponsored occupation?

However, even if we accept the Department’s report as endorsed by Jonathan Capehart, the question remains, did Officer Wilson have no alternative but to use deadly force on Michael Brown? Clearly the answer is no.

Wilson’s alternatives were at least three. He could have (1) stayed in his car and called for backup, (2) allowed Brown to “escape” and later arrest him (with suitable reinforcement) at Brown’s home which was known to the police, or (3) in the worst of circumstances, shot the unarmed Brown in the legs to wound rather than kill.

The fact that such alternatives did not occur to Wilson underscores the poor training of police in our country. Clearly all of them are instructed on how to use their deadly force weapons. Evidently however, they are not sufficiently trained on how and when not to use them.

As for the hazards of policing, it doesn’t even rank among our country’s ten most dangerous jobs. Those belong to loggers, fishermen, pilots, roofers, steel workers, garbage collectors, electricians, truck drivers, farmers, and construction workers.

That list puts into perspective the “I feared for my life” defense inevitably invoked by police allegedly mistaking wallets, pens, candy bars, and sandwiches for lethal weapons.

As retired NYPD detective, Graham Witherspoon puts it: if policemen are that afraid to put their lives in danger, they’ve chosen the wrong profession.  It would be better, he said, to “go home to mommy,” and find some other line of work.

Ironically, Darren Wilson and his defenders are correct in their claim that he was “just doing his job.”

That’s exactly the problem: the job of the law enforcement in our emerging police state is now to intimidate, control, and kill with impunity rather than to “serve and protect.”

In uncritically endorsing the DOJ’s “occupying army” model of policing, Capehart leads us to support (in the blogger’s words) a force that “would otherwise offend our sense of right and wrong.”