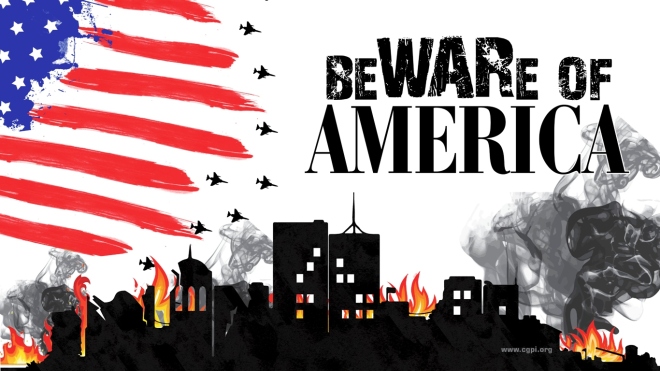 The United States is an imperial country. That’s beyond question. The title is proudly owned by our presidents, military leaders, public intellectuals and academics. Our country is intent on world conquest beyond anything Adolf Hitler imagined. According to the Defense Planning Guidance for the 1994–99 fiscal years, the United States will brook no military rival as it seeks to maintain and expand U.S. control of the entire world. That’s the so-called Wolfowitz Doctrine.

Having fulfilled its expansive intention in countries formerly belonging to the Soviet Union, the U.S. is now concentrating on the Middle East. According to General Wesley Clark, not two weeks after 9/11, the United States decided to invade seven countries over the next five years: Iraq, Syria, Lebanon, Libya, Somalia, Sudan, and Iran.

The goal is resources – especially oil and natural gas – as well as strategic locations for military bases, not to mention the profits from massive arms sales necessary for such conquest. So far, “America” has reduced Iraq and Libya to chaos. It is now working mightily on Syria and is accomplishing the same chaotic results. (In Syria the immediate intent is to secure corridors for natural gas pipelines from Qatar to service the EU.) According to many, ultimate focus for the U.S. is control of Russia and China.

For people of faith, such plans (unfolding before our very eyes) are shocking, especially in view of the wanton destruction of human life and the environmental catastrophe wreaked by such misuse of resources and power. It is enough to make us wonder where is God? Why does he not intervene to destroy this new Evil Empire which happens to be our home? Isn’t God on the side of empire’s victims? Isn’t God on the side of peace and justice?

Today’s liturgy of the word shows that such questions are long standing. The day’s readings are about faith and miracles, and about what we mean by those terms in situations of occupation by predecessors of the United States in the bloody business of empire. More specifically, the readings call us to revise our understandings of God – from the “Man Upstairs” micromanaging the world and intervening to prevent wars and suffering caused by brutal empires like Babylon, Rome – and the United States.

Instead, the readings invite us to see God as the One who empowers us to be miracle workers – to figuratively transplant trees and relocate mountains by simply saying “Move from here to there.” Since miracles are fundamentally changes of perception, the call here might be for us to change our benign perception of the United States. Without that, it will just continue to do what it’s doing – destroying nation after nation and the natural environment with it.

On the other hand, our readings call us to be slow, patient, persevering and trustful in the face of our desires for instant solutions to imperial madness like the insanity I’ve just described.

In today’s first reading, the prophet Habakkuk apparently believes in the Man Upstairs. Faced by imperial hubris, he openly and impatiently questions that God.

Towards the beginning of the 6th century BCE, the prophet was witnessing the rise to power of the Chaldeans (or Babylonians). Like the U.S. today, that particular empire ruled by means of a sickening and genocidal violence.

“Are you blind to their wanton destruction?” Habakkuk cries out to God. “Why don’t you do something?”

And then comes the unexpected divine response: “Don’t worry, Habakkuk; things will get a lot worse before they get better!”

The reading from Habakkuk is complemented by the discussion of faith in Luke. At the beginning, the apostles say to Jesus, “Increase our faith.” What do you suppose they meant by that? What do we mean when from the bottom of our hearts we echo their request relative to the defeat of Evil Empires close to home?

Is it our desire – was it that of the apostles – to have fewer questions about the virgin birth, Jesus’ divinity, the existence of God, or papal infallibility? Is it our prayer that we become more convinced that God can prevent and stop wars like the slaughter in Syria? Is that what we mean by faith – believing things about God, Jesus, or the doctrines of the church? Does faith mean believing that God will defeat the apparent omnipotence of the rich and powerful who themselves would occupy God’s throne?

Or is faith the power we achieve when, like Jesus, we realize that the divine dwells within us – that we are in effect God? That faith would lead us to act like Jesus and to share in his unshakeable commitment to God’s Kingdom of peace, forgiveness, and reconciliation despite setbacks and complete failure before the might of the Romans who killed him.

Yes, that’s the kind of faith Jesus had. As Paul says today in 2nd Timothy, such faith is synonymous with courage. It is identical with the power of God as revealed in Jesus – a human being who could cure the sick, drive out evil spirits and even raise the dead.

Problem is, Jesus didn’t use that power to dismantle the Roman Empire, block its destruction of Jerusalem, or even prevent his own death by Roman decree. Despite the miraculous powers the gospels attribute to him, he seemed impotent before imperial Rome, even though like the rest of his contemporary Jews he struggled for its replacement with the Kingdom of God. To repeat: in the end, he was empire’s victim and died an apparent failure overwhelmed by realpolitik.

What does that tell us about Jesus-inspired faith? At least the following:

8 thoughts on “God’s Answer U.S. Imperial Madness: Defeat Is Only a Matter of Time (Sunday Homily)”