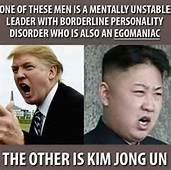 “Meet the Press” and other news programs were abuzz last Sunday over the apparent testing of a hydrogen bomb by North Korea. In the aftermath, President Trump not only threatened nuclear war with North Korea (again!). He also harshly criticized South Korea for proposing to engage its neighbor in diplomatic talks. The president tweeted that such proposals would be fruitless, since North Korea “understands only one thing.”

So rather than talk, the president evidently prefers bombing – nuclear bombing – in an area of the world that is home to half the world’s population as well as to its largest militaries and most prosperous economies. He’s threatening nuclear war in a region that hosts 83 U.S. bases, and where authorities estimate that even a conventional artillery barrage from the North would kill 64,000 (including South Koreans and U.S. military personnel) in the first three hours.

Meanwhile, Kim Jong-un, of North Korea (like Trumps admired “friends,” for example General Sisi of Egypt, the Saudi princes, and Rodrigo Duterte of the Philippines) is, no doubt a repressive dictator who cares little for human rights. However, his development of nuclear weapons and repeated shows of force are not unreasonable. After all, he is exquisitely aware of what happened to Saddam Hussein and Muamar Gaddafi after they stopped similar programs. Like all North Koreans, he recalls his people’s history that saw his country invaded and flattened by the United States during the Korean War which cost 1,316,579 North Korean lives.

Even now, President Kim also feels that his country is encircled and under severe U.S. threat and provocation. Consider how we would feel if North Korea (or Russia or China) had 83 bases in Mexico, if its ships were constantly patrolling in the Gulf of Mexico, or if it were regularly dropping mock nuclear weapons on D.C. What would Washington do under such circumstances? Yet, mutatis mutandis, the United States has been provoking North Korea in exactly these ways for years.

What then would be a proper response to North Korea’s counter-threats?

Today’s liturgy of the word gives specific directions. There, Matthew the Evangelist addresses the problem of conflict resolution. He emphasizes dialog not revenge and violence. In fact, he outlines four alternatives towards resolving disputes even like the one between the United States and North Korea. He has Jesus say that if step one doesn’t work, move on to the subsequent strategies. The four alternatives include (1) healing conversation with one’s adversary, (2) arbitration with a mediator or two, (3) consultation with the entire community, and (4) shunning the offending party.

More specifically, Matthew has Jesus say, “If your brother sins against you, go and tell him his fault between you and him alone . . . If he does not listen, take one or two others along with you, so that ‘every fact may be established on the testimony of two or three witnesses.’ If he refuses to listen to them, tell the church. If he refuses to listen even to the church, then treat him as you would a Gentile or a tax collector.”

Obviously, these words did not come from Jesus himself. To begin with, there was no “church” at Jesus’ time. Jesus was thoroughly Jewish and a reformer of Judaism rather than the founder of some new religion or “church.”

It was different for Matthew who was writing for a community of specifically Jewish Christians some fifty years after Jesus’ death. By then, questions of community order within the emerging church had become prominent. So Matthew invents this saying of Jesus to deal with them.

Another reason for reaching this conclusion is the reference to treating a recalcitrant individual “as you would a Gentile or a tax collector.” This phrase reflects traditional Jewish avoidance of Gentiles and hatred of Roman collaborators. It runs counter to the practice of Jesus who time and again in the Gospels causes scandal by practicing table fellowship and community with the very people Matthew’s instruction indicates are outsiders to be shunned by believers.

Were Matthew following the Spirit of Jesus, the evangelist’s instructions for addressing conflict resolution might involve the following process: (1) private dialog with one’s adversary, (2) arbitration with a mediator or two, (3) consultation with the entire community, and (4) moving in with the offending party – or at least taking them out for dinner regularly.

In any case, the emphasis in Jesus’ own approach is communion, not shunning or refusal to talk. Nowhere does Jesus’ approach say that one should refuse meeting until the offending party stops offending. Much less does the process outlined include “if he refuses to listen, kill him and his entire people.”

“But,” you object, “The words attributed to Jesus in today’s gospel selection are about church order, not about international politics, much less the irrationality embodied in Kim Jong-un. Jesus’ instruction, you might say, is about private disputes among Christians and are laughably impractical in the political sphere.

And that’s just my point. To repeat: Matthew’s account does not reflect the teaching or practice of Jesus. Jesus’ actual teaching was not confined to the private realm. His practice was highly political.

Eating with tax collectors, street walkers, lepers, Pharisees, Gentiles (including members of the Roman army) represented doing the unthinkable, the unexpected, the forbidden. . .  It meant crossing boundaries, breaking taboos, acting counter-culturally, and offending people on all sides of sizzling debates.

This is what the example of Jesus calls us to do even in the case of North Korea. Its emergence calls for departure from business as usual. It requires admission of guilt and responsibility on the part of the United States. It demands a complete reversal of “American” policy.

Today’s second reading from Paul’s letter to the Christian community at Rome puts a finer point on the reasons for such response on the part of those pretending to follow the teachings of Jesus.

Paul reminds us of Jesus’ summary of God’s law. He writes:

In other words, there is no meaningful distinction between you and any other human being you care to name – even if we call them “communists” or “terrorists.” Moreover, if you shared the same history as your “enemy,” you would be doing exactly the same thing that currently enrages you. As a result, no killing can be justified. It is suicide. That’s the thrust of Jesus’ words: to kill the other is to kill yourself. Killing of any kind is suicide.

What does that mean for followers of Jesus’ way in relation to North Korea? At least the following, I think:

For Christ’s sake, Mr. Trump, do the unthinkable. Hard as it might be: repent. Listen to North Korea. Reverse course. How dare you threaten collective suicide!