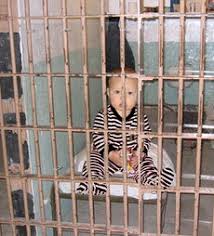 No, it’s not abusing them sexually, though that’s bad enough. Of course, pedophilia is the horrendous crime so many Catholic priests have committed from time immemorial. It is nearly unspeakable in its selfish cruelty. It deserves absolute contempt and condemnation.

However, the worst crime is not sexual abuse. No, it’s separating children from their parents. A little introspection about your own children or grandchildren might tell you that. Picture them deprived of your presence and love — forever. Can you imagine having your child snatched from your paternal arms or from your nurturing breast?

Incredibly, that’s the crime committed by white Evangelicals who represent the largest constituency of Present Donald J. Trump. They commit it by their unconditional support of the one who has actually created baby jails. Yes, baby jails that permanently separate the most innocent creatures we can imagine from the ones that love them dearly. This crime tortures not only the babies, but their mothers and fathers too.

Of course, both Catholics and Evangelicals camouflage their misopedia by pretending to care about unborn embryos and fetuses – creatures for whom they cannot possibly exercise practical responsibility and whose parents tend to be “those others:” blacks and browns, immigrants and the poor in general. Opposing abortion represents what Dietrich Bonhoeffer called “cheap grace.” It’s costs the opponents absolutely nothing.

Yet, once the unborn come to term – once the newly born and young might cost taxpayers a few dollars – erstwhile Christian child-defenders disappear. They wash their hands of the whole affair. They effectively tell parents “Now you’re on your own, good luck.” They even oppose “Big Government” programs like SNAP and TANF that have proven in other countries to reduce abortions by significantly relieving the financial worries of new parents.

Worse still, patriotic Christians support killing the young by the hundreds of thousands and without a second thought. They do so in places like Yemen, Palestine, Iraq, Syria, Afghanistan, and Ethiopia. That’s the short list of killing fields where children are slaughtered mercilessly and on an hourly basis by “American” bombs effectively blessed by the “Christians” I’m referencing. (Secretary of State and devout Christian, Mike Pompeo, nakedly supports such slaughter because it’s good for the U.S. arms industry.)

All of this conflicts with the portrayal of Jesus in today’s Gospel reading. There, Jesus embraces a real child of the kind Trump-supporters show little concern about once the creatures advance beyond fetal status.

In fact, Jesus uttered not a word about abortion. But Mark’s portrayal speaks volumes about Jesus’ attitude towards the kind of children Catholics and Evangelicals tend to hate. He could not have been clearer In his absolute identification with them: “Whoever welcomes one such child in my name welcomes me.”

To repeat, in doing that Jesus is not embracing a fetus, but an actual living child about whose human status there can be no debate. Moreover, the child in question was probably of the type many opponents of abortion have little use for or sympathy with. After all today’s gospel scene takes place in Capernaum, the urban center that Jesus adopted as his home town after he was thrown out of Nazareth precisely because of his programmatic concern for the poor.

Remember: Jesus spent his time among the poor who represented his own origins. So, the child Jesus embraces was probably a smelly street kid with matted hair and a dirty face. He or she was probably not unlike the street kids found in any city today – the ones hooked on sniffing glue and who have learned to sell their bodies to dirty old men from way across town, and often from across the world.

I make all this supposition because the reason Jesus embraces the child in question is to present his disciples with a living example of “the lowest of the low” – God’s truly chosen people. In Jesus’ world, all children were at the bottom of the pecking order whose rabbinical description ended with “idiots, deaf-mutes and the young.” And among the young, street children without father or mother would indeed represent scraping the bottom of the barrel.

Embracing children like that doesn’t mean practicing “tough love,” nor forcing impoverished mothers to bring their children to term and then telling them “You’re on your own.” Rather, embracing poor children – truly being pro-life – means creating a welcoming atmosphere that receives children as we would receive the Jesus who identifies with them in today’s gospel.

Yes, it suggests supporting those “Big Government” programs that work so well elsewhere – the programs Donald Trump and his supporters are hell-bent on eliminating.

Remember all of that when you hear your pastor’s sermon on abortion this Sunday. Remember it when you cast your vote on November 6th.