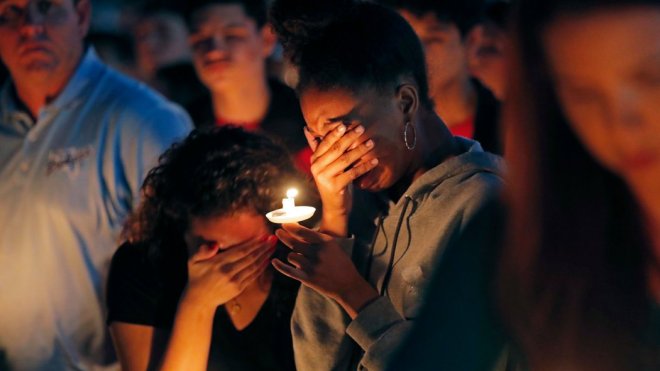 It was domestic terrorism pure and simple. Our children were its object. And our politicians don’t give a damn.

Of course I’m talking about the most recent school shooting in Florida. There, Nikolas Cruz, an expelled high school student slaughtered 17 of his former schoolmates.

But Cruz was white and a gun worshipper. So the politicians don’t care. Instead of talking about the most elementary, common sense restrictions on gun ownership, they bow down before the NRA and a sacralized interpretation of the Second Amendment.

Instead, they offer their de rigueur “thoughts and prayers.” They explain how “this is not the time to politicize the tragedy” by discussing gun control. They explain away the massacre’s causes in terms of the Mr. Cruz’s supposed mental illness.

However, just imagine the reaction if the shooter were an immigrant, a DACA dreamer, if he were black, or especially if his name were Mohammad! The response would be generalized and immediate regardless of constitutional protections, regardless of international law. Conclusions would be drawn about the intrinsic violence of Islam and about how immigrants are criminals and prone to mayhem. We would be told that all of them need to be expelled and/or excluded. There’d be references to “ISIS links.” There’d be talk about bombing, drones and military options.

Everybody knows that’s all true.

Moreover, if the shooter had been Muslim or immigrant, we would never hear mention of mental illness on his part. (Apparently, the victims of colonial control, war and U.S. bombing remain psychologically impervious to such effect.) There would never be sympathetic statements (as in the case of Charlottesville) about “very fine people” that can be found among those sympathizing with the violence.

If you doubt that, just recall that following 9/11 and shootings by Muslims, constitutional protections like the 4th Amendment were overridden without a second thought. In case you’ve forgotten, this is what the Amendment says:

‘The right of the people to be secure in their persons, houses, papers, and effects,[a] against unreasonable searches and seizures, shall not be violated, and no Warrants shall issue, but upon probable cause, supported by Oath or affirmation, and particularly describing the place to be searched, and the persons or things to be seized.’

Despite those clear words (every bit as “sacred” as the Second Amendment), the government now claims the right to surveil all of our e-mails, and listen in on our phone conversations. Moreover, it says it can extrajudicially kill U.S. citizens anywhere in the world regardless of what the Constitution might say. And this despite the fact that terrorist attacks on U.S. soil, compared with the frequency of school shootings, have been far rarer. Since the beginning of this new year, school shootings like the one in Florida have occurred once every 60 hours!

No, the time for calling terrorism by its true name has long since arrived. Nikolas Cruz is a terrorist. The NRA is a terrorist organization. And so is the Republican Party (along with pro-NRA Democrats). As Noam Chomsky has indicated, because of its stand on climate change, nuclear warfare, and (I would add) gun control, the GOP is the most dangerous organization in the history of the world. They are all terrorists and terrorist sympathizers.

In the name of our children that must be said and its logical conclusions acted upon!

9 thoughts on “The Florida School Massacre Is Domestic Terrorism: and the NRA and the Republican Party Are Terrorist Organizations”