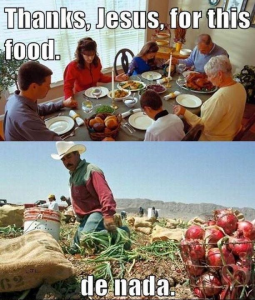 Today’s liturgy of the word invites us to consider the hot-button issue of immigration. The issue is contentious because conservatives in our country generally oppose immigration reform. More accurately, they tie changes in the legal status of immigrants to strengthening border security with Mexico and the building of walls along our southern border to keep undocumented immigrants out. Until such measures are foolproof, conservatives generally promise to oppose reform of immigration laws.

That’s ironic because Evangelical Christians make up the strongest component of the U.S. conservative party, the GOP. So the dominant attitude of that party on immigration ends up militating against American Christians’ brothers and sisters in faith. After all, according to a recent study by the Pew Research Center’s Forum on Religion & Public Life, an estimated 83 percent, or 9.2 million, of the 11.1 million people living in the United States illegally are Christians from Latin America and the Caribbean.

Our readings this morning call into question such exclusionary attitudes about immigration. They suggest that far from excluding immigrants, insisting on observance of law, and building walls to keep them out, Christian response to immigrants should take the form of welcoming, wealth-sharing and service.

Let me show you what I mean.

To begin with, today’s first passage from the Book of Wisdom underlines the point that the biblical People of God were all immigrants. They were unwanted strangers whose ancestors had come to Egypt to escape famine in Palestine. Remember those Bible stories of Joseph and his brothers? Read them again (Genesis 37-50). Those legends explain how the families of Jacob’s sons came to be enslaved in Egypt in the first place. As you no doubt recall, Joseph’s brothers sold him into Egyptian slavery.

However, in Egypt, Joseph landed on his feet and eventually became the Pharaoh’s Minister of Agriculture. That meant that when famine struck Joseph’s former homeland, his brothers were forced to come hats-in-hand to beg food from the very one they had betrayed. However, when they came into Joseph’s presence, his own brothers didn’t recognize him. In one of the most beautiful stories in all of world literature, the unrecognized Joseph finally discloses his true identity. Instead of punishing them for their betrayal, Joseph feeds his brothers and invites them to join him in Egypt.

In other words, Joseph’s response to immigrants and refugees was to recognize them as members of his own family and to welcome them “home.”

In today’s second reading, Paul digs further into Israel’s past only to find that Abraham himself (the original father of Israel) was himself an immigrant. He entered a land that God decided was to belong to Abraham and his descendants though the ones dwelling there didn’t share that secret understanding. (The Canaanites, of course, thought Canaan belonged to them.)

So Abraham and his sons were forced to live in poor housing – in tents, Paul recalls for us. All the while, however (like most immigrants) they dreamt of better lodging “with foundations.”

Meanwhile Yahweh saw to it that Abraham’s family grew prodigiously. They begat and begat until they seemed to everyone to be “as numerous as the stars of the sky;” they were as plentiful as grains of sand on the beach. Such legendary fertility eventually came to be seen as threatening and led one pharaoh to order the death of all of the Hebrew immigrant boys (Ex. 1:22). By Yahweh’s special intervention, Moses alone was saved from such genocidal population control.

Again, this was Israel’s God protecting immigrants as his chosen people. That’s the point today’s responsorial psalm underlines with its refrain, “Blessed the people the Lord has chosen to be his own.” Ironically those people were persecuted immigrants.

Then in today’s Gospel, Jesus presents a riddle about the identity of his faithful servants. Jesus asks, “Who, then, is the faithful and prudent steward whom the master will put in charge of his servants to distribute the food allowance at the proper time?” His answer has implications for immigration reform measures.

In any case, you can imagine a lengthy interchange between Jesus and his audience about his riddle. No doubt, some identified “faithful and prudent stewards” with those who kept the absolute letter of the law. Others probably cited the Jewish purity code and said fidelity meant keeping the bloodline pure; it meant keeping foreigners out of the Holy Land and preventing inter-marriage with gentiles. Still others may have responded in economic terms. For them the faithful and prudent steward was probably the one who defended Jewish livelihood by keeping foreigners from taking Jewish jobs.

Jesus’ own response is different. He replies in terms of generosity, as well as in terms of service with its “law of abundance.” Jesus also invokes the law of karma. God’s faithful servants are those who sell what they have and give it to the poor. They are not the ones who are served, but those who serve. Meanwhile those who mistreat God’s servants will reap what they sow.

Above all, notice that the emphasis in Jesus’ words today is on service. His riddle brings us entirely from the “upstairs” culture of dominance into the “downstairs” culture of servants. The steward is the head servant. He’s in charge of others, but his service consists in distributing food allowances to his fellow servants. Even the Master ends up serving. When he returns from the wedding, his servants don’t wait on him. Rather as an expression of gratitude, he brings them upstairs, sits them at table and waits on everyone! (How consoling is that?! The “law of abundance” says that what we receive in life is determined by our own generosity.)

Similarly, we can’t mistreat others without harming ourselves. The law of karma decrees that we reap what we sow. Jesus endorsed that law in today’s reading. More specifically Jesus says that those who mistreat God’s servants will find themselves similarly mistreated. Here Jesus gets quite graphic: to the degree that they beat others, they themselves will be beaten. Again, it’s the law of karma; and it’s inescapable.

What does Jesus’ riddle have to do with immigration? First of all, remember it’s told by a former immigrant. According to Matthew’s story, Jesus lived in Egypt when Mary and Joseph sought refuge from Herod’s infanticide. Yes, Matthew’s Jesus must have known first-hand the experience of being an unwanted immigrant. In Egypt he spoke with a Jewish accent. Or maybe his family didn’t even bother to learn Egyptian.

Remember too that the riddle about faithful servants is posed by the Jesus who identifies with “the least of the brethren.” He said that whatever we do to the least, he considers done to him. In terms of today’s considerations, does that mean that what we do to immigrants, we do to Jesus?

As for Jesus’ response to his own riddle, it reminds us to receive immigrants as we would our Master returning home – yes, as our Master, Jesus himself – the one who ends up serving us! Again, Jesus identifies with the least of our brothers and sisters.

Does that mean that Jesus appears to us today in our service industries and in the informal economy where immigrants work as our kids’ nannies, our house cleaners, as construction workers, hotel maids, and gardeners?

At this very moment might Jesus be out there cutting my lawn, roofing my house or cleaning my bathroom?

When our border guards beat “illegals” (and worse!) are they beating Jesus?

And what does that mean for their karma – and for ours?

Those are riddles worth discussing and solving!

The way we answer will determine the side we come down on in the immigration debate.
(Discussion follows)