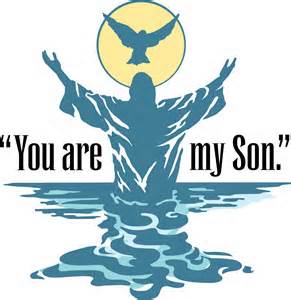 Today is the Feast of the Baptism of the Lord. In that context, let’s think about baptism and the differences between the understandings we’ve inherited and those reflected in the practice of John the Baptist and Jesus of Nazareth. Those differences hold practical implications for our own lives as we wrestle with a faith that may have lost meaning for us, and as we struggle with the relative smallness and insignificance of our lives.

To begin with, think about traditional beliefs about baptism. If you’re like me, you may find them hard to swallow. A friend of mine, theologian Tony Equale, has recently pointed out that theology doesn’t really determine worship patterns. Instead superstitious temple and church rituals have shaped our beliefs. Practice determines belief, not the other way around.

What my friend means is that theology’s job has traditionally been to rationalize what people actually do in their efforts to tame life and achieve contact with the numinous, the mysterious, and the transcendent. They sacrifice chickens, behead bullocks, or vivisect lambs and then burn the animals’ carcasses. The smoke thus ‘feeds’ the Gods who are believed to need nourishment, placation, and cajoling in order to do the will of the people and their priests. Those congregations actually turn out to be more intelligent than the God who must be informed of their needs and what is best for their welfare. That’s superstition.

Catholic beliefs around baptism represent a case in point. Those convictions were actually formulated in the light people’s credulous practices which were informed more by ancient ideas of all-powerful angry gods than by Jesus’ radical teaching that God is Love. I mean early on, in a time of very high rates of infant mortality, popular belief came to see infant baptism as necessary to somehow save deceased children from a hell created by a threatening God.

This practice of the people rather than reflection on the words and deeds of Jesus led St. Augustine at the beginning of the 5th century to theorize that people have been born guilty – at enmity with God. Augustine thought that since children were condemned even before any personal sin on their parts, they must be born in sin. And that must be, Augustine reasoned, because they had inherited sin from their forebears and ultimately from the first human beings, Adam and Eve. Because of that “original sin,” God is justly angry with humans.

How different all this is from what happens to Jesus at the baptism which today’s liturgy of the word celebrates! (And that brings me to my point about the apparent insignificance of our little lives.) In today’s gospel, there is nothing suggesting “original sin.” Nor is Jesus presented as the incarnation of a God who needs to be mollified by sacrifice. Rather, Jesus comes as a disciple of John. (Scripture scholars tell us that John’s words about his inferiority before Jesus were inventions of the early church in a Jewish context where many still believed that John rather than Jesus was the long-awaited Messiah.)

So at the age of 30 or so, this young peasant from Nazareth presents himself for a ritual washing at the prophet’s hands in the legendary Jordan River. In Israel’s idealized past, that river had been crossed by slaves escaped from Egypt who on the river’s opposite shore found the “Promised Land” that became their national home. Eventually that crossing came to be understood as transforming a motley horde of renegade slaves into a unified nation of free people at the service of the God who had liberated them from demeaning servitude.

John’s practice of baptism in the Jordan (far from the corruption of the priests’ Temple and its endless sacrifices) summoned his Jewish contemporaries to reclaim their ancient identity that had been lost by the priests and scribes who had sold out to Roman re-enslavement of a once proud and liberated people.

John’s was a revivalist movement of Jewish reform. Those presenting themselves for baptism were expressing a desire to return to their religious roots and to alter their lives in a profound way.

Evidently, that’s why Jesus came to be baptized too. This country boy who (according to Luke’s “infancy narratives”) had begun his life with such promise is now about 30 years old. Perhaps in view of his parents’ expectations of him, his life so far seemed wasted. Perhaps he had resolved to finally make a difference. In any case, by approaching John in the Jordan’s waters, he expresses an intense need for change in his life. He wants to be John’s follower

So John performs his baptismal ritual. And the miraculous happens! As recorded in Mark’s gospel, an epiphany occurs for Jesus (MK 1: 9-13). He hears a voice. It informs him that he is a child of God. “You are my beloved son,” the voice proclaims. (Matthew’s later version of the story which we read today – evidently influenced by developing beliefs concerning Jesus’ divinity – transforms the words in Mark into a revelation for others, “This is my beloved son,” Matthew’s more exalted version reads.)

In any case, having received his call, Jesus Immediately he sets out on a vision quest to discover what those shocking words might mean. Forty days of prayer and fasting bring on the visions – of angels and devils, of temptations, dangers and possibilities (MT 4: 1-11).

In the light of his desert experience, Jesus chooses not only to follow John as the leader of a reform movement. He chooses as well to follow Moses as the liberator of an enslaved people. He has truly crossed the Jordan. So he brings his message to the captive poor. Like him, they too are children of God—God’s specially chosen people. God’s kingdom belongs to them, he says, not to their rich oppressors. They must not allow themselves to be misled by the stultifying and domesticating doctrines of the priests and scribes. Those were Jesus’ words.

But he acts upon them as well. He discovers wondrous healing powers within himself. By touch, by faith, by his friendship, he cures stinking lepers, dirty beggars, street walkers who have lost their self-respect, the deaf, the dumb, the blind and lame. Jesus eats food with the social outcasts and street people of his day, sharing nourishment the way God does – without cost or expectation of reciprocation. Jesus finds himself explaining the mysterious, transcendent and ineffable in unforgettable stories that capture the imaginations of simple people hungry for the spiritual sustenance that he offers – that he embodies.

No wonder his early followers tried to imitate Jesus by choosing John’s baptism as a sign of membership in their community and by following the Master’s example of sharing food the way God does in their re-enactment of the Lord’s Supper.

That was the understanding of baptism that the first Christians embraced. But it didn’t last long. Within a few generations (and especially after Christianity became the official religion of the Roman Empire at the end of the 4th century) the superstitions I referenced earlier had replaced the understanding and practice of Jesus and the Baptist. Soon baptism became an instrument for saving babies from original sin and hell. Soon the Lord’s Supper became the “Holy Sacrifice of the Mass” differing very little in ritual and spirit from offerings to Jupiter and Mithra.

Today’s liturgy of the word calls us beyond all of that. It summons us to follow Jesus who shows us the way to truly change our lives. Change comes by leaving behind the superstitious faith that supports empires past and present. Transformation comes when we share our food with each other and with the poor. It happens by committing ourselves to the “other world” represented by God’s Kingdom that has room for everyone, not just for the 1% served by our own churches, priests, scribes and their superstitious rituals.

Today’s liturgy of the word summons us to the banks of the Jordan to stand with Jesus and to hear God’s voice calling us from what has been so far wasted in our lives. Like Jesus, we are daughters and sons of God. We are beloved by the God of Love. Jesus’ example reminds us that It’s not too late to change our commitments and way of life.

After all (if we take our tradition literally) Jesus redeemed the insignificance of his own life in a single meaningful year – or maybe it was three. . . .