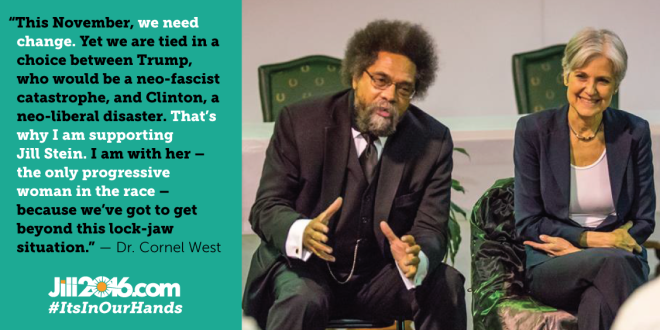 Well, I watched the final debate last night. Once again, it pointed up the debate format’s limitation and the absence of alternatives to the duopoly of Democrats vs. Republicans.

Specifically, it made me miss the voice of Green Party candidate, Jill Stein.

Her absence on the debate stage prevented voters from hearing her viewpoint on vital issues virtually excluded from the three personality-focused brawls between Mr. Trump and Ms. Clinton. I’m referring to income inequality, student debt, climate change, public transportation, disease prevention, and the continuing need for 9/11 transparency to blunt its rationale for insane military expenditures and endless war.

Liberal funnyman, John Oliver, recently endorsed such exclusion in a strained barely-comic monologue that merits comment not only because of its shallowness, but because it discouraged expanding the narrow parameters of current political debate. (See Stein’s own response to Oliver here.) In his routine, Oliver attempted to disqualify Dr. Stein because she raised the very issues just indicated. More specifically:

Ignored in all of this is the fact that Jill Stein’s positions are identical with those of Bernie Sanders who (now that he is no longer a candidate) has been nearly canonized by people like Oliver. In fact, Dr. Stein invited Sanders to join her on the Green Party ticket; she would run, she offered, as his V.P.

Ignored too were the actual lyrics of candidate Stein’s songs that (unlike Mr. Trump and Ms. Clinton) dared to raise the issue of climate change – as well as specifics about child and maternal health. Instead, Oliver focused on Stein’s voice [which turns out to be about as (dis)pleasing as Bill Clinton’s saxophone on Johnny Carson or Michelle Obama’s dancing with Jimmy Fallon.]

However, the most significant omission from Oliver’s denunciation was the importance of voting for Dr. Stein in red states. If Stein garners only 5% of the national vote, her name can appear on presidential ballots in many states in the next election cycle, Even more importantly, the Green Party will receive millions of dollars in campaign funds in 2020.

So, red state Democrats (like me in Kentucky) concerned about overcoming the dominance of the duopoly, and about continuing the Bernie Revolution should discount Oliver’s shallow criticisms and recognize their vote for Jill Stein as a small, but significant step towards reaching the Green Party’s important 2020 goals.