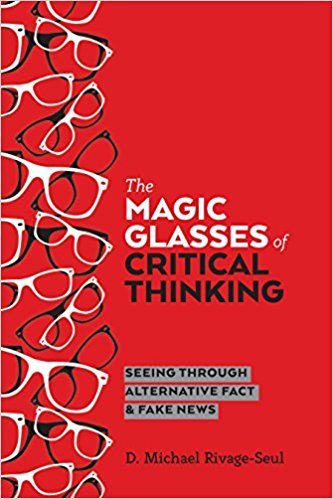 Mike Rivage-Seul has just published the book progressive teachers have been waiting for to ground their post-secondary courses on critical thinking. Available on April 17th from Peter Lang Publishing, the book is called The Magic Glasses of Critical Thinking: seeing through alternative fact and fake news.

Rivage-Seul is an emeritus professor of peace and social justice studies at Berea College in Kentucky, where he taught for more than 40 years. He publishes a monthly column in the Lexington Herald-Leader.

His approach to critical thinking – to education itself – should be familiar to progressives. It starts from the position that the purpose of such process is not primarily to interpret the world, but to change it. Therefore, critical thinking and education should not be neutral. It should equip students with the tools they need for social activism.

Magic Glasses summarizes what Rivage-Seul considers the most important insights he gathered over his years of travel and study throughout Europe and especially in the Global South – specifically in Brazil, Nicaragua, Cuba, Costa Rica, Honduras, Mexico, Zimbabwe, South Africa, and India, as well as in Israel-Palestine.

“As you can tell by the title,” Mike says, “The Magic Glasses could hardly be timelier. The concept comes from the great comedian and social activist, Dick Gregory. He spoke of critical thinking as functioning like a set of spectacles. They confer special insight enabling their wearers to see things quite differently from what is considered ‘normal.’

In other words, Rivage-Seul’s book might be a dangerous read. For instance, he echoes Global South scholars by seeing sinister intent in the Declaration of Independence’s celebrated statement that “All men are created equal.” With those same scholars, he refers to World War II as the “Second Inter-Capitalist War,” and sees the United States as currently occupying the same global position that Adolph Hitler aspired to attain – with similar effect.

“I’ve been wearing Gregory’s magic glasses for years,” Mike says. “They’ve shaped my all my teaching and have often got students mad at me – at least at first. And you should read some of the comments my newspaper columns get! It’s all because I constantly apply the ten rules for critical thinking that my book explains.”

As a result of employing those guidelines, Rivage-Seul understands U.S. history, terrorism, the renewed nuclear arms race, world hunger, trade agreements, immigration, Black Lives Matter, and other hot button issues in ways that end up being 180 degrees opposed to the mainstream.

“I’m in good company though,” Mike observes. “I’m trying to channel the spirit of the world’s great critical thinkers. Think about it. None – not Jesus, the Buddha, not Gandhi, Martin Luther King, Dorothy Day, Thomas Merton, or Helen Keller – was neutral. They weren’t worried about ‘balance’ or offending anyone. For them, speaking truth to power and living with the results were all that mattered.

“I’m hoping that my book falls into that tradition.”

That social activist tradition is indeed developed in The Magic Glasses. And each point is illustrated with movie clips from films such as Traffic, The Post, Avatar, Sausage Party, The Distinguished Gentleman, Good Will Hunting, American Sniper, Captain Phillips, American History X, War Dogs, Bulworth, and even with the Broadway musical, Hamilton.

In sum, The Magic Glasses of Critical Thinking represents and attempt to supply secondary and post-secondary teachers with a complete syllabus for a course on critical thinking that will help students radically revision their world in ways that inevitably challenge all of their preconceptions.

As such, Rivage-Seul’s book on critical thinking is not only the one progressives have been waiting for, it’s a page-turner as well. As Rob Kall, the editor-in-chief of OpEdNews puts it in his endorsement:

“I love this book. It’s brilliantly written by a very wise man who’s been serially enriched by spending time with some of the world’s greatest visionaries. And he shares what he learned from his conversations with them. The book is addictively readable. I started to skim the book to see if it was worth putting my time into and found I couldn’t stop reading. Michael Rivage-Seul brings sparkling vivacity to the potentially dry topic of critical thinking. As one who has interviewed hundreds of visionaries, I found this book to offer new perspectives and ways of seeing-which is what building critical thinking skills is all about. This book offers so much more than what its title, at first glance suggests. Have a taste and you, will like me, find yourself wanting to consume all the courses of this delicious meal.”

5 thoughts on “Press Release: The Critical Thinking Manual Progressive Teachers Have Been Waiting For: My New Book”