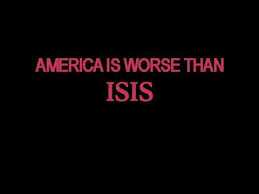 With so much talk of war these days, it’s time to follow the example of Dr. Martin Luther King and once again break silence about our country’s evil character. Yes: it’s character is evil! We’re a war-mongering country, a terrorist country. As King said 51 years ago this month, we’re “the world’s greatest purveyor of violence.”

It’s time to face up to the fact that the United States has been taken over by Christianists far more violent than the Islamists we excoriate. To wit: “we” stand ready to risk all-out nuclear war with Russia. “Our” reason? An alleged chemical weapons attack by Bashar al-Assad, the president of Syria. Our indisputable proof? None at all! It’s Iraq all over again!

And the hell of it is that to these Christian extremists, nuclear holocaust – the destruction of the planet – is acceptable, even desirable, because it will assure the Second Coming of the very Jesus who is presented in today’s Gospel selection as the great bringer of peace.

Just to be clear: No Muslims threaten the world with equivalent religious extremism.

(BTW If you think that statements like the above are unfair, because not all — not even the majority — of Christians hold such beliefs, think about how Muslims feel, when the views of their extremists are similarly universalized.)

In their zealotry, the fundamentalists in Washington somehow ignore the fact that the first words of the risen Jesus repeated in today’s Gospel (as they were in last week’s reading), are “Peace be with you.” They ignore the Jesus who was completely non-violent. He preached the Golden Rule. He said we should love our enemies. He accepted his own death rather than defend himself, his friends, or family. He died praying for his enemies.

Moreover, the Christianists in Washington are completely hypocritical. In the name of the international law, they’re outraged by the “dozens” perhaps killed in the alleged Syrian chemical weapons attacks. Meanwhile, they’ve killed more than a million Iraqis in a completely illegal war. Daily, they assassinate suspected terrorists, including American citizens, with death squads now mechanized as drones.

Meanwhile in Yemen, the poorest country in the Middle East, and in clear violation of international restrictions and the U.S. Constitution, those same Christian extremists have caused the deaths of thousands and threaten the lives of millions.

More specifically, since 2014, they have been responsible for the deaths of 10,000 and for the injury of 40,000 more. They’ve caused a devastating cholera epidemic and a famine that the UN describes as “the worst humanitarian crisis in the world.”

It’s all been the result of a U.S.-supported Saudi bombing campaign that directly targets hospitals, water supply sources, and sewage treatment plants – all prohibited be international law. In the process, the U.S. supplies those medieval Saudi kings with weapons, targeting information, and airborne refueling services. Pure terrorism!

Face it: our crimes in Yemen represent a far, far worse violation of international law than the alleged chemical weapons attack in Syria.

Yes: today, King’s words ring truer than ever. We continue to be “The world’s greatest purveyor of violence!” We’re a terrorist nation.

And how do the Christianists get around Jesus’ clear words? Typically, they spiritualize today’s Gospel greeting. “Peace be with you.” They say it refers to the interior peace that passes understanding.

How reminiscent of the Nazis who went to Mass, meditated and enjoyed “inner peace” on Sundays, while for the rest of the week they stoked ovens where they incinerated communists, socialists, blacks, homosexuals, and Jews!

Inner peace is fine. However, reality in the belly of the beast suggests that such spiritualizing is out-of-place. We need to be reminded that inner tranquility is impossible for citizens of a rogue nation. None of us should enjoy inner peace today.

Rather than giving us comfort, pastors should be telling us that there can be no interior peace for terrorist Christian fundamentalists. They — our nation’s officials — are traitors to the Risen Christ!

Focusing on a utopian interior peace and denouncing transgressions of international law while butchering children across the globe is simply obscene.

It’s time for all of us to face up to the facts. It’s time to join the martyred Dr. King in breaking our silence!

3 thoughts on “With Dr. King, We Must ‘Break the Silence’”