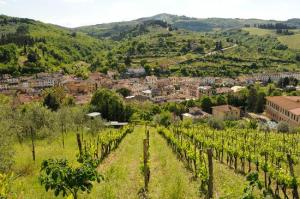 Well, we’re finally off on our five-month-long adventure to India. Peggy and I left last Wednesday (August 28th). Right now we’re in Italy staying in a Tuscan villa in Panzano in Chianti. It’s hard to believe that people actually live in such bucolic beauty surrounded by vineyards, rolling hills and castle-like structures like the one we’re luxuriating in at the moment.

I won’t bore you with the details of our journey here – cancelled flights, lost luggage, racing through airports, schlepping excessive baggage through the streets of Rome, lugging it onto a train between Rome and Florence, mistaking someone else’s bag for my own and carrying it off the train, getting tongue-tied in Italian and having it all come out Spanish. You can imagine the drill.

The reason for our trip? Peggy has won her second Fulbright Award – this time to Mysore, India. (Her last Fulbright in 1997-98 brought all of us to Zimbabwe, where Peggy taught at the University of Harare.) We’re all so proud of her. She’s enriched all of our lives immeasurably by the brilliance and hard work that have brought us to such exotic places.

This time Peggy’s grant will have her teaching at the university in Mysore. But that’s not the good part. Whereas in Zimbabwe, it was Peggy, I and our two boys Brendan and Patrick staying in Harare, this time we’ll be with our daughter, Maggie, her husband, Kerry, and their three children, Eva (4), Oscar (2), and Orlando (1). That’s the group that’s so enjoying our stay in Tuscany right now.

And, yes, our son, Brendan and his girlfriend, Erin, were with us as well. They stayed here for a week and left last evening. Brendan’s on leave from his work at the U.S. Embassy in Afghanistan. He’ll be back at his desk there on Wednesday. His tour in Afghanistan will end on December 29th. We’re all holding our breath and counting the days.

Maggie and her family are here because Kerry has taken a sabbatical from his job with a hedge fund. What an opportunity for them and their children! While in India, the kids will be in Montessori School just as they were back home in Westport, CT. Who knows what adventures await all of us in India?

My own adventure, I hope, will involve deepening my practice of meditation. With everyone’s blessing my plan was to do a ten-day retreat centralizing the Vipassana method of meditation. That would have begun on September 11th, and involved ten hours of meditation each day. Just this morning however, I received word that my application has been refused because of oversubscription. I’m now searching for an alternative.

In any case, if all goes well with the shorter experience, I’ll do a thirty-day retreat later on. We’ll see how things develop.

I’ll be writing regularly about our experiences as the adventure unfolds.