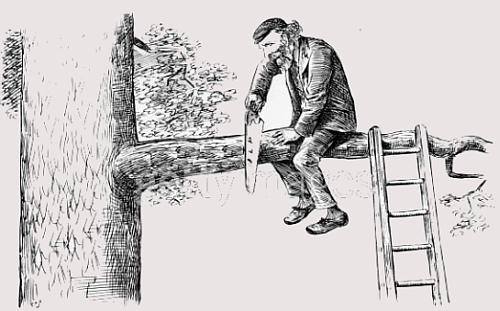 It was like watching a man sitting high above on a tree limb sawing away at it and bragging about the quality and sharpness of his saw. I’m talking about President Trump’s first State of the Union (SOTU) message last night. It was ridiculous in its necrophilic braggadocio.

“Look how great I am,” the braggart kept repeating one way or another. I’m promoting “clean coal” and oil that will make the planet unlivable for your grandchildren. (Applause!) I’m proposing a wall in the desert to keep poor people out (instead of dykes everywhere to protect low-lying cities against rising sea levels). I’m willing to start a nuclear war that will be the end of us all. (Even wilder applause!) In the meantime, as head of the Family Values Party I have the courage and integrity to destroy immigrant and refugee families – to tear parents away from their children and send them back to countries that our great economic system has ruined. (Wildest applause of all!)

Encouraged by the cheers, the president just kept sawing away reminding everyone with eyes to see and ears to hear that his perch will soon come crashing down.

The hell of it is, however, that we’re all sitting on that branch with him.

It was Trump’s SOTU position on immigrants and refugees that was particularly offensive in the light of this Sunday’s reading from the Gospel of Mark. There the evangelist announces a theme central to his Gospel, to the teachings of Jesus, and those of Paul of Tarsus. It is that laws that don’t serve people are invalid. They should not be obeyed.

That’s the opposite of the Republican position on immigration. It puts legalism ahead of the welfare of human beings. It says: “We’re a country of laws. Those immigrants who have crossed borders illegally don’t deserve to be here. They’re ruining our country. We must send them back even if it means depriving children of their parents. Otherwise, what will become of our great legal system? Laws are sacred, (and to repeat and repeat) we’re a country of laws.”

The insanity of that positon is illustrated by comparing the GOP attitude towards laws and people with its approach to laws relative to money and products. As Robert Reich recently pointed out so eloquently, Republicans value the latter more than people. For the GOP, money and merchandise have the right to cross any border. People do not.

That’s to forget that immigration is an economic problem. Immigrants are part of a globalized labor force. They are an essential part of an economic equation that includes capital (money, factories, offices, etc.) on the one hand and labor on the other. You can’t have one without the other. Yet, as I said, capital and merchandise are allowed to cross borders regardless of their impact on people, while labor must stay put. That’s a policy that values things over human beings.

And it’s all legal, only because moneyed people in their smoke-filled back rooms say so. They confect laws to justify the whole arrangement. And they do so over the strong objections of local peasants, for instance, in Mexico who understand that “free trade” and subsidized corn entering their country from the U.S. spells the end of their incomes and way of life. The laws in question override the concerns of environmentalists and trade unionists who recognize that the “legal” trade agreements of the rich ravage their ecosystems and destroy far more jobs than they create. However, in the name of self-serving “law” created precisely by the rich and powerful, it’s all O.K.

Jesus and Paul recognized the syndrome even in the early first century. So, they both embodied in their persons and proclaimed in their teachings that laws that fail to serve human beings need not be obeyed. In fact, they should be disobeyed!

That’s the case in this morning’s Gospel reading, where Mark sets the tone for his entire Jesus narrative by having the master’s very first public act be the transgression of the Jewish Sabbath Law – the holiest of all. The theme will become central to the conflict between the scribal establishment and Jesus which Mark will centralize.

In any event, and regardless of their motivation (inspired by faith or not), the global labor force is in practice asserting with their feet their agreement with Jesus and Paul. They are insisting on their rights as indispensable parts of the economic equation. Like capital, they are crossing borders regardless of laws, walls, ICE agents, and saw-obsessed, suicidal presidents. In the end, they will not be denied.

Keep that in mind, as you read my little reflection that follows below:

Jesus very first cure,
Mark is careful to note,
Took place on the Sabbath
Which the scribes kept by rote
Without thinking at all
Of its purpose or aim
Which was to help people
Rather than blame
Them for curing the sick
Or raising the dead.
Acting like him
Fulfills the law, Jesus said.

His act of defiance
Sets a tone for Mark’s book
And sends a strong message
If we but care to look.

It says law’s invalid
If it doesn’t serve man.
It’s a tool of oppression
It’s more worthless than
The ills and the sickness,
And sins Jesus forgave.
It’s worse than our death
It’s worse than the grave.

So, in the spirit of Jesus
We must break any law
That acts like a tooth
That looks like a claw
To bite and tear mothers
Their husbands and sons
Their daughters and grandkids.
You know the ones
I’m talking about
In this day and age:
Immigrants and refugees.
It should fill us with rage
When they’re excluded from here
For breaking a law
That only serves rich men.
(That’s what Jesus saw.)

So “devout Catholic,” Paul Ryan
Should take careful note.
He’s one of those people
Thinking only by rote
About all that money
And about Wall Street stock
About what they hold sacred
Though their laws truly mock
The teachings of Jesus
About the poor and the lame
And how meeting their needs
Is the Good News he came
To announce to us all
If we choose but to hear:
From those fleeing oppression
We have nothing to fear.