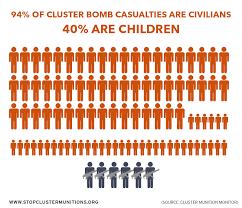 Minutes ago I learned that the U.S. has done it again. On mere allegations of WMD use, without public debate or serious investigation, it has launched a barrage of missiles – this time on Syria.

The justification? The Syrian government allegedly used poison gas that killed women and children – “Babies, beautiful innocent babies” as our president put it.

Meanwhile, the United States itself:

What does all of this mean?

It means that on principle, the United States doesn’t care about killing civilians or “beautiful babies.” Somehow, it’s the manner of killing them that is objectionable. If civilians starve to death, that’s apparently O.K. If they are slaughtered by bombing, that’s O.K. too.  It’s acceptable even if women and children are killed by the banned chemical weapon, white phosphorous (as they were in Iraq’s Fallujah under Mad Dog Mattis – our current Secretary of Defense) or by banned cluster bombs which end up killing and maiming children because unexploded, brightly-colored ordnance looks like toys.

And where does all the bombing get us? Absolutely NOWHERE! NOTHING positive has been accomplished by these incessant acts of war committed by the country Dr. King described as the greatest purveyor of violence in the world. NOTHING positive has been served by the wars-without=end waged by our Amerika identified by most of the world as the greatest threat to its peace and security.

How long can we endure the hypocrisy before we all rise up against the warmongers who pretend to lead us?

This is absolutely intolerable!